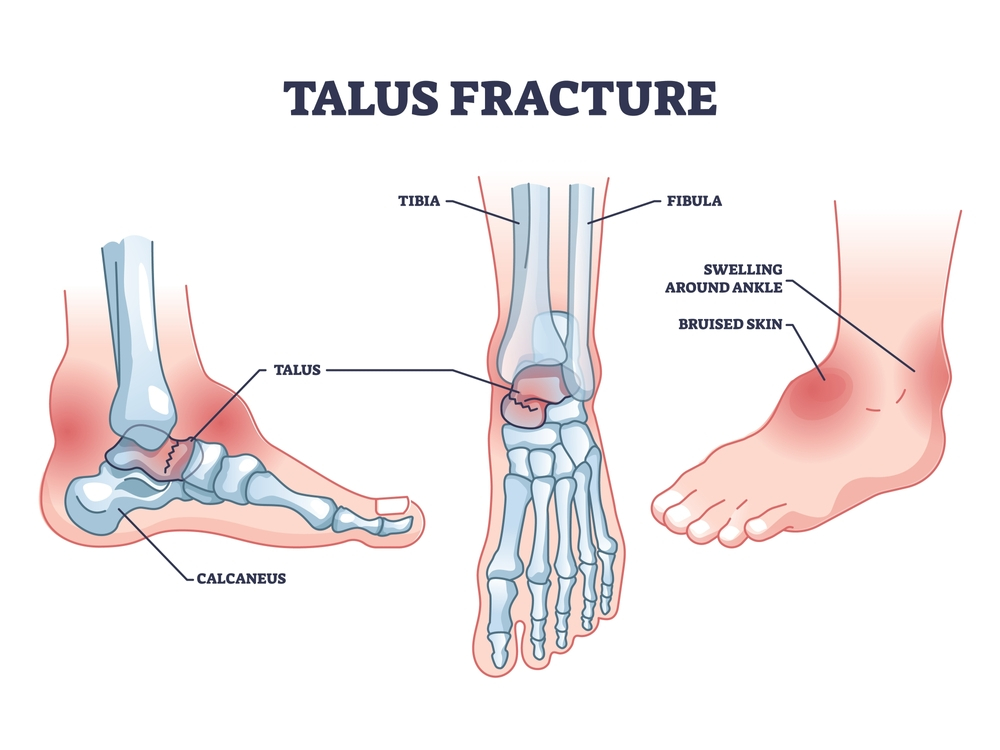 The bone in your foot known as the talus joins your ankle to your leg. A break in this bone is known as a talus fracture. The ankle joint is formed when your talus connects to your tibia and fibula (lower leg bones). Your foot can move up and down thanks to this joint. The subtalar joint is formed by your talus, which is positioned above your heel bone (calcaneus). Your foot can move side to side thanks to this joint.

Your talus aids in spreading your ankle joint’s weight. The majority of it is cartilage-covered. Your bones can slide easily against one another thanks to the slickness of cartilage. Due to its importance in allowing for ankle movement, a talus fracture can result in a significant loss of motion and function.

The bone that makes up the lower portion of the ankle joint is called the talus (the tibia and fibula make up the upper part). Your foot can swivel up and down thanks to the ankle joint. Additionally, the heel bone is above the talus (calcaneus). The subtalar joint is made up of the talus and calcaneus. When walking on uneven terrain, the ability of your foot to move inward and outward through this joint is crucial.

The main joint between the foot and the leg is the talus, which aids in distributing pressure forces and weight across the ankle joint. Articular cartilage, the white, slick substance that covers all joint surfaces, covers it in large part. The talus can move smoothly against its neighboring bones thanks to this cartilage.

Your talus bone can break in a variety of locations and ways. Talus bone fractures include the following:

The lateral process refers to the surface of your talus bone. These fractures happen when your ankle is pushed to the side and forced outward. Snowboarders frequently experience lateral process talus fractures, also known as “snowboarder fractures.”

A small section of your talus bone that is attached to a ligament or tendon pulls away from the rest of the bone, causing a talus avulsion fracture.

A small section of your talus bone that is attached to a ligament or tendon pulls away from the rest of the bone, causing a talus avulsion fracture.

Talus fractures are classified based on how far the bone fragments have moved from their normal position.

This type of fracture is hardly noticeable. The broken ends of the bones line up correctly, or nearly so. The bones in a minimally displaced fracture usually remain in place during healing. There is no need for surgery to repair the bones.

When the bone breaks, the pieces move out of their anatomic position, resulting in a displaced fracture. The displacement is proportional to the force of the injury. Fractures that are highly displaced are more likely to be unstable. They frequently necessitate surgery to correct the alignment and give the best chance of returning to normal foot and ankle function.

When broken bones break through the skin, they form an open or compound fracture. Open fractures frequently cause more damage to the muscles, tendons, and ligaments that surround them. Furthermore, open fractures expose the fracture site to the environment, allowing debris from outside the wound to enter the wound. As a result, they are more prone to infection and frequently take longer to heal.

Your symptoms will vary greatly, depending on the type of talus fracture.

The initial symptom is typically an acute ankle pain. There could be a tiny bit of tenderness and swelling. Although it won’t be pain-free, you should be able to walk on it.

Greater tenderness, swelling, and pain are present. Perhaps you won’t be able to bear any weight on the hurt ankle.

The sight of bone poking through the skin is the most obvious symptom. There will be a lot of pain. There might also be a lot of bleeding. A person with an open fracture may faint from shock or blood loss quite frequently.

A stress fracture or chip may resemble an ankle sprain. Particularly when walking on it, you’ll experience pain and tenderness. However, the discomfort might not be severe enough to cause you to suspect a fracture. This can occasionally cause people to delay getting a checkup and treatment, even though prompt treatment could hasten their recovery.

If your doctor suspects you have a talus fracture, he or she will carefully examine your ankle for obvious displacement. You might be asked to move your toes or if you have a normal sensation on the bottom of your feet. This is done by your doctor to check for nerve damage. They’ll also look to see if the blood supply to the foot is healthy.

If you were in an accident or fell, your doctor will examine your legs, pelvis, and back for damage.

If your doctor requires more information, he or she may order a CT scan. This may be necessary in cases of more severe breaks or when there are multiple fracture lines in the talus.

As with any excruciating ankle injury, a well-padded splint should be applied immediately to immobilize and protect the limb in the case of a talus fracture. The splint ought to cover the entire foot and upper calf. Swelling and pain can be reduced by elevating the foot above the level of the heart. It is important to seek immediate medical attention because the type and severity of the fracture will determine the specific treatment.

Because of the high-energy force that causes the injury, many talus fractures necessitate surgery. However, fractures that are stable and well-aligned are frequently treated non-surgically. Usually, a combination of immobilization and later rehabilitation is used to accomplish this.

Your foot’s bones will be stabilized by a cast as they heal. For six to eight weeks, you will need to wear a cast. You will be instructed to apply less pressure to your foot during this time. The bone needs to heal completely before you can put weight on it without worrying that it will shift out of place.

Your doctor will prescribe exercises to help you regain range of motion and strengthen your foot and ankle after the cast is removed.

The best outcome and lowest risk of complications come from surgery to internally set and stabilize the broken pieces when the bones have shifted out of place (displaced).

Open reduction and internal fixation – The bone fragments are first moved (reduced) into their usual alignment during this procedure. Then, using metal plates and screws or special screws, they are held together.

Zealmax Ortho provides a wide range of implants to fix talus fracture. Implan’ts design and techniques make sure patients get the early mobilization and activeness. Zealmax Ortho creates and distributes the most reliable orthopedic implants, which are frequently used in surgery all over the world and have a high success rate. We provide a wide selection of bone implants at affordable prices without compromising on quality.

Request For A Catalog